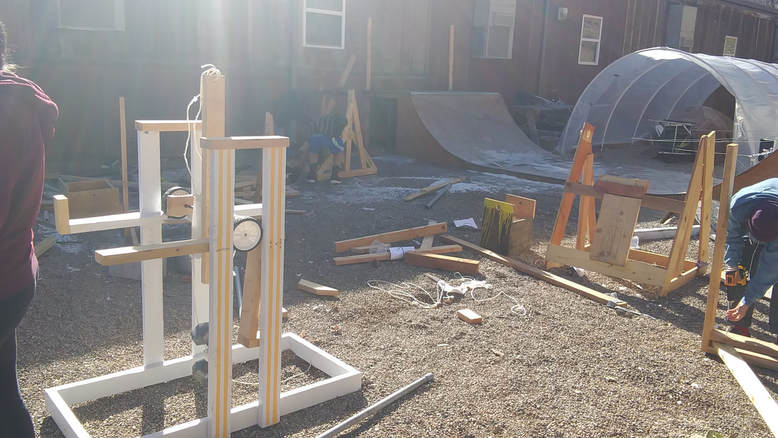 During this project our class made trebuchets, to those who do not know what a trebuchet is, it is a machine used in medieval warfare for launching large objects such as stones or other missiles. We first started out by learning about acceleration, velocity, gravity, potential energy, and kinetic energy. To those  who do not know what the meaning of acceleration, velocity, gravity, potential and kinetic energy, acceleration is increasing the rate of speed of something. Velocity is the speed of something given in a direction. Gravity is what makes a object  an object fall down to earth it pulls objects down, potential energy is energy possessed by a body by virtue of its position relative to others, stresses within itself, electric charge, and other factors, kinetic energy is energy that a body possesses by virtue of being in motion.. Now that we know what those are a trebuchet has both potential and kinetic energy. In this case, the potential energy happens when it’s not being released and you are just holding it and the higher the projectile gets, the more potential it will have to launch farther. The kinetic energy was happening when the projectile is released and flys. When the counterweight of the trebuchet is released the projectile accelerates. Like i said, acceleration is a change in velocity and velocity is speed with a direction. So that means when the projectile accelerates, the projectile's velocity is going to as well. Once we learned all that important stuff we took our knowledge and started on our prototypes, we used popsicle sticks and made mini trebuchets to have an idea of what  our big trebuchets would do.
During this project we had to work on two main twenty first century skills collaboration and communication. I feel that this was a struggle for our group we didn't really work as a group i felt like my opinions didn't matter even when I had a suggestions but my group would take it but it's ok i still helped with what my partners with what they wanted to do, I just feel like i did not advocate for myself and say that we needed to collaborate more and let other people try their ideas but this was my first really big project at animas and i feel we could do better in time when we have other group projects.